This vegan dulce de leche is smooth, creamy and full of sweet caramel flavor. Perfect for drizzling over pancakes, vegan ice cream or even brownies. And, it only takes 4 simple ingredients to whip up this indulgent caramel sauce. Who's in?

Everything just tastes better with the perfect sauce. And this vegan alternative to the famous dulce de leche sauce is just the ticket!

You can drizzle it over almost anything that partners well with a sweet sauce. For instance, I drizzled it over my favorite cornbread recipe :The Best Vegan Cornbread - No Eggs, and it was fabulous. You might even taste it and just decide to eat it with a spoon. No judgments here!

What's The Difference Between Caramel And Dolce De Leche?

Because this recipe is vegan, we're going to replace the cow's milk with coconut milk and coconut cream. The result is outstanding! And, it's dairy and gluten free.

How do you store vegan dulce de leche?

Store in an airtight container in the fridge for up to one month.

Yes, store it in a jar in the freezer for up to 6 months. 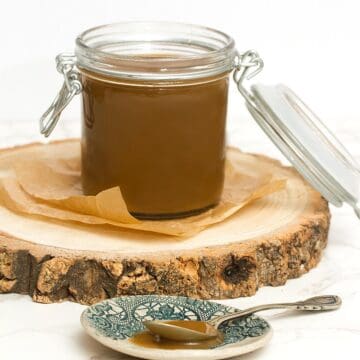