Banana peels are marinated in a smoky mixture that mimics the flavor of bacon. They're then fried to crispy perfection. And, believe it or not, they taste surprisingly like bacon! Serve it with my air fryer breakfast potatoes for the ultimate vegan breakfast.

There's something so deliciously creative about vegan meat substitutes that you can make at home. If you haven't already tried them, I highly recommend my Vegan Chicken Wings and my seitan-based Vegan Chicken Nuggets With Chipotle Mayo .

But, what about bacon? In the vegan groups I participate in, bacon and cheese are the two omnivorous foods that vegans say they miss the most. With that in mind, I decided to do my own spin on the viral banana peel bacon trend. And, I wasn't disappointed!

Can You Eat Banana Peels?

Yes, you can! In fact, despite the fact that banana peels are not used much in Western culinary traditions, they appear in many dishes in other cultures.

If you don't believe me, check out this banana peel curry by Surprising Recipes. Bengalis have been using raw banana peel in their famous chutney kancha kola khosha bata. And, in the southwest region of India's Kerala state you can sample a thoran, a regional specialty where banana peels are sauteed with coconut, curry spices and chilies.

Banana peels are not poisonous. In fact, the skins are packed with fiber and contain nutrients such as Vitamin B6, B12, magnesium and potassium.

So, feel free to enjoy banana peels as part of your vegan diet. Not only will you benefit nutritionally, you'll be reducing your food waste.

How To Make Banana Peel Bacon

It is if you tamari, and not soy sauce (which contains gluten). You might also want to check the ingredients on your liquid smoke label, to make sure it contains no gluten.

How do you store banana peel bacon?

Banana peel bacon is best eaten straight away. However, if on the off chance you leftovers, store them in an airtight container for up to 48 hours. 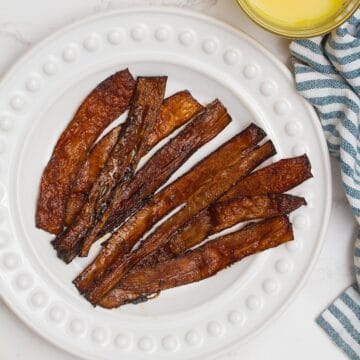