So, what's a vegan to do? Check out this recipe, vegan friends! I've made a lighter, healthier plant-based version of this iconic British breakfast. Think of it as a healthy fry up breakfast that will be loved by vegans, vegetarians and omnivores.

I normally start my morning with a smoothie or a bowl of vegan cereal. But, let's face it, sometimes you need a proper full English breakfast! Make no mistake about it - this is a BIG plate of food. There's quite a few individual parts to cook. So, all in all, it usually involves using lots of pots and pans.

How To Make A Vegan Full English Breakfast

Is a full English breakfast healthy?

No. In order to make this recipe gluten free, you would need to use gluten free bread for the toast. You would also need to check the ingredients in your vegan sausages, as many contain gluten. 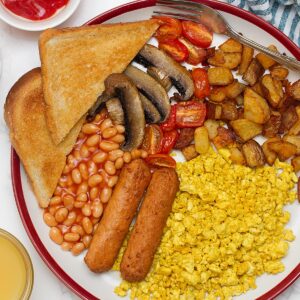 For Sausages, Tomatoes And Mushrooms

For The Baked Beans