This Just Egg French Toast recipe is eggless and dairy free, but you'd never know it! Crispy on the outside, and creamy in the the center with a hint of cinnamon and vanilla flavor, this French toast will soon become your favorite vegan breakfast.

French toast (sometimes referred to as "eggy bread") is one of my favorite breakfasts. Somehow it feels more decadent and special than pancakes, and it's just as easy to make.

Typically French toast is made by combining eggs with milk or cream to form a creamy custard. Thick slices of bread are soaked in the custard and fried to golden perfection.

In this recipe, Just Egg, a creamy egg replacer, replaces chicken eggs. Almond milk is swapped for cow's milk...and there you have it...the best dang vegan French toast EVER!

What Are The Ingredients in JUST Egg?

So, what exactly is JUST egg? And, is it healthy?

JUST egg is a delicious sustainable egg made entirely from plants. These are the ingredients listed on the back of the bottle:

Amazon reviewers give it rave reviews, claiming that it looks and tastes like chicken eggs. And, I have to agree!

I decided to give it a try in this French toast recipe, and honestly, I couldn't tell the difference between French toast made with chicken eggs, and Just egg French toast.

But, is JUST egg healthy? The answer is yes! JUST egg is:

Here's how to make the best vegan French toast EVER!

How do you store leftover JUST egg French toast?

Allow the French toast to cool, wrap in foil and store in the fridge in a reusable bag.

Absolutely!Place a sheet of parchment paper between each slice, wrap in foil and store in a reusable freezer bag.

If You Liked This Recipe, You Might Enjoy These Vegan Breakfast Recipes

Your Guide To Vegan Drinks At Starbucks 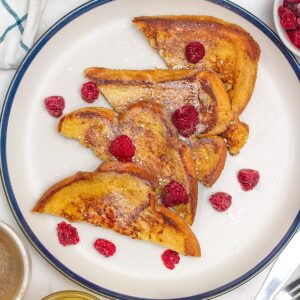