You only need a few simple ingredients to make these vegan cucumber tea sandwiches. Arranged on a platter, they make an elegant and impressive vegan appetizer for a party.

Cucumber tea sandwiches are traditionally served at British afternoon tea. You'll also find them being served during tea break at cricket matches. They're closely tied to British culture, and have come to represent an elegant, dainty snack most often enjoyed by the upper class.

My vegan cucumber sandwich is a little bit different, so if you're a purist...look away!

I've replaced the butter with vegan cream cheese and opted for a dark rye in addition to the traditional white bread. I've also added parsley and chives to the vegan cream cheese, for an herby kick that complements the fresh cucumbers.

How To Make Vegan Cucumber Sandwiches

If so, I'd love to see it! Tag me on Instagram @thisdailydish. Or leave me a comment below. It makes my day, and your feedback helps other readers.

Can you make cucumber sandwiches the night before?

Yes, you can! Store them in an airtight container in the fridge for up to 24 hours.

How do you keep cucumber sandwiches from drying out?

Spread cream cheese on both the top and bottom slices of bread for the creamiest cucumber sandwich.

How To Make The Best Vegan Charcuterie Board 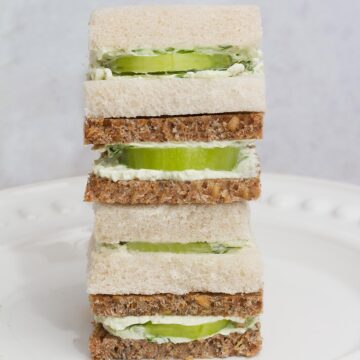