These Vegan Jaffa Cakes are just as brilliantly tasty as the store bought version (which are not vegan, by the way). Recreate this iconic British teatime treat at home with my easy recipe. You'll love the decadent textures and flavor combinations. And, this recipe is dairy free and eggless!

If you're not familiar with Jaffa Cakes, I can only assume that you're not British!

For those not in the know, this classic tea cake is a layered combination of biscuit sized sponge cake, orange jelly and dark chocolate. They've been a popular British confection since the 1970s.

Unfortunately, store bought Jaffa Cakes are not vegan. They contain butter oils and dried egg, making them unsuitable for anyone on a plant-based diet.

But, now vegans can enjoy this classic British biscuit with my simple vegan Jaffa cake recipe.

✓It's easy to make vegan Jaffa Cakes at home.

✓These vegan Jaffa cakes are just as delicious as the original biscuit at the shops!

How To Make Vegan Jaffa Cakes

How do you store dairy free Jaffa Cakes?

Store them in an airtight container at room temperature for up to three days.

Can I make these vegan Jaffa cakes gluten free?

Yes, but you'll need to use a self raising gluten free flour blend. 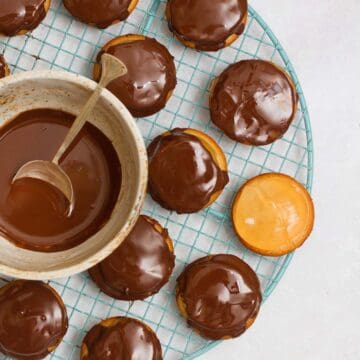