These vegan flapjacks are a dairy free twist on this classic British oat bar. There's no butter in this recipe - instead, we'll be using a great vegan alternative, coconut oil!

While flapjacks are another name for pancakes in the USA, the traditional British flapjack is a simple oat cake made of rolled oats, sugar, syrup and butter (in our case coconut oil.) Think of flapjacks as the predecessor to granola bars.

The first mention of flapjacks was in the Oxford English dictionary at the beginning of the 16th century, at which time the word referred to a flat tart.

Interestingly, Shakespeare refers to flapjacks in one of his historical plays, saying:

Come, thou shan't go home, and we'll have flesh for holidays, fish for fasting-days, and moreo'er puddings and flap-jacks, and thou shalt be welcome."

How To Make Vegan Flapjacks

You can use this vegan flapjack recipe as a template. Feel free to add in things you have in your pantry that you think might be yummy. Here's a few ideas:

Absolutely, almost all oats are gluten free, but it's always a good idea to buy oats that are specifically marked as gluten free if you strictly avoid gluten.

How do I store vegan flapjacks?

Vegan flapjacks will stay fresh in the fridge in an airtight container for up to 10 days.

Can I freeze flapjacks?

Yes, you can. Wrap them in foil and freeze for up to three months. Defrost in the fridge. 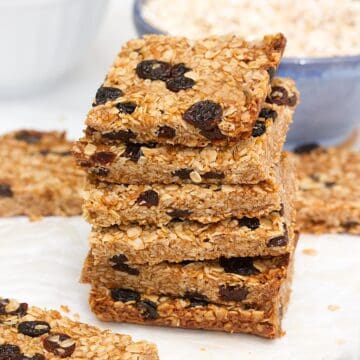 Keri Bevan
These vegan flapjacks are a dairy free twist on a classic British dessert. Crunchy on the top and sweet and chewy on the inside, they're perfect with a cup of coffee or tea. They can be made with under 15 minutes hands-on time and they're naturally gluten free.
5 from 4 votes
Print Recipe Pin Recipe
Prep Time 10 mins
Cook Time 20 mins
Total Time 30 mins
Course Breakfast, Dessert
Cuisine British
Servings 9 servings
Calories 257 kcal