I love this Chinese vegan chow mein recipe for many reasons, but especially because it's loaded with healthy vegetables. Add chow mein noodles and a flavorful chow mein sauce and you have the perfect easy vegan dinner!

If you can't tell from my broccoli and cashew stir fry or my vermicelli noodles stir fry , I love vegan Chinese food! Give me rice, noodles and vegetables any day, but make sure they're dressed in a yummy sauce (that's the real secret!)

But first, let's answer some common questions about this recipe:

No, chow mein sauce is not typically vegan, and depending on the type that you order, many recipes include meat.

If you want a truly vegan chow mein, you'll likely need to make your own at home. That's why I've made a recipe for exactly that!

Most chow mein noodles are vegan. Typically the ingredients used are water, salt and flour. However, some brands may contain eggs, which is fine if you're making a vegetarian chow mein. But, if you want it to be vegan, be sure to check the ingredients.

Like most Chinese foods, if chow mein is prepared with light oil and packed full of fresh vegetables and noodles, it's a nutritious meal.

The star of this dish is the sauce, but you can easily swap in different veggies for the one ones in the recipe. Here's a few suggestions:

Can I make chow mein without noodles?

Sure you can, simply omit the noodles and keep the sauce recipe the same. The recipe is gluten free without the chow mein noodles.

I can't find chow mein noodles? Is there something else I can use?

Ramen noodles are a great substitution for chow mein noodles.

I want to make chow mein with crunchy noodles, like I've had at my local Chinese.

What vegan proteins are good to eat with chow mein?

Chow mein is excellent with tofu, tempeh or seitan.

How To Prepare And Cook Shiitake Mushrooms 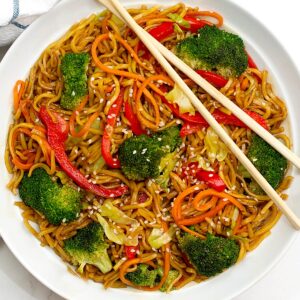 For The Chow Mein Sauce

For The Vegan Chow Mein