This vegan cornbread dressing is the perfect classic Thanksgiving side dish. It's moist and fluffy, and the cranberries give it a touch of sweetness and color . Serve it with my festive lentil loaf, pureed parsnips with roasted garlic and a shaved brussels sprout salad for a memorable vegan Thanksgiving meal.

Is It Vegan Stuffing Or Vegan Dressing?

That depends on where you're from! Southerners and Midwesterners tend to refer to it as dressing, while below the Mason Dixon, they'll think you're crazy for not calling it stuffing.

To make matter's even more confusing, stuffing is typically what you "stuff" into a bird, while dressing is cooked in a pan.

Wherever you come from and whatever you call it, we can all agree that without this iconic dish, Thanksgiving just wouldn't be the same. And given that, vegans should be able to enjoy a traditional Thanksgiving menu too - enter vegan cornbread dressing (or stuffing, take your pick!)

How To Make Vegan Cornbread Dressing

If so, I'd love to see it! Tag me on Instagram @thisdailydish. Or, leave me a comment below.! It makes my day, and it helps other readers!

Go ahead and use your creativity here! There's plenty of ways to make this recipe your own. Here's a few ideas:

Can I make vegan cornbread dressing ahead of time?

Can I freeze vegan cornbread stuffing?

Yes, divide the vegan cornbread stuffing into serving size portions and put them in an airtight containers. You can freeze cooked vegan cornbread dressing for 3-6 months.

How To Make The Best Vegan Chartcuterie Board

Vegan Pigs In A Blanket 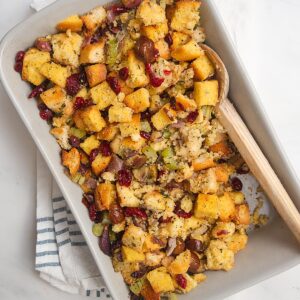