Cornbread pancakes are fluffy and toothsome with a crunchy exterior. And like cornbread, they have an interior of dense crumb. My cornbread pancake recipe produces buttery and sweet cakes, thanks to vegan buttermilk and maple syrup. I've also given you an optional cherry compote to top them with off with. Southern heaven!

The cherry compote topping is so easy to make. It's entirely optional, but I highly recommend it. The sweetness of the cherries tastes lovely with the buttery cornbread. Of course you could also use maple syrup or caramelized bananas. I think these cornbread pancakes will become a weekend regular once you try them!

How To Make Cornbread Pancakes With Cherry Compote:

Can I use water instead of milk in cornbread pancakes?

If you keep the ratios the same, they will still turn out, but I don't recommend it as this recipe uses vegan buttermilk, which is what makes it so yummy.

What do I serve with cornbread pancakes?

I just treat them like a traditional pancake and serve them with a maple syrup or compote for breakfast. But, you could use them as a side as the Caribbeans do with their famous cornmeal pancakes (known as Jonny cakes.) Johnny cakes are frequently eaten with soup or baked beans.

Can I use fruit or nuts in the cornbread pancake batter?

Sure! This recipe is so flexible. Chopped pecans , almonds, blueberries, and strawberries are all delicious options.

Can you freeze cornbread pancakes?

Absolutely! Lay them out on a baking sheet and freeze until they're solid, about an hour. Then put them in a reusable freezer bag. They will keep for three months.

Pancakes Without Milk Or Eggs 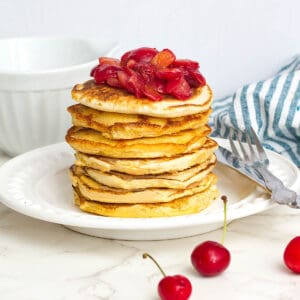