Imam bayildi is a much loved Turkish dish. In its traditional Ottoman form, it's a simple stuffed eggplant dish that's more than the sum of of its parts.

What is Imam Bayildi?

The name "imam bayildi" literally translates "the imam fainted." Turkish folk tales tell of an imam that swooned and fainted with pleasure when his wife presented him with this dish.

This classic stuffed eggplant dish can be found in varying forms in Bulgaria, Israel, Macedonia, Greece and Iran. There are literally dozens of ways to prepare it.

I've reduced the traditional heavy use of olive oil, and added some crunchy, garlic infused breadcrumbs.

I can't guarantee that you'll swoon and faint, but you'll probably love this dish enough to make it part of your regular vegan dinner rotation.

How To Make Imam Bayildi

What should I serve Imam Bayildi with?

You can serve imam bayildi as a vegan main course, or as part of a larger mezze spread. I like to serve it with rice or bulgar, a wedge of lemon and flat breads. You could also serve it with a simple salad, such as Jerusalem Salad.

How do I store leftover Imam Bayildi?

You can store leftovers in the fridge for 3-4 days. Reheat in the oven until it's hot and the topping has a nice crunch to it - 10-15 minutes. 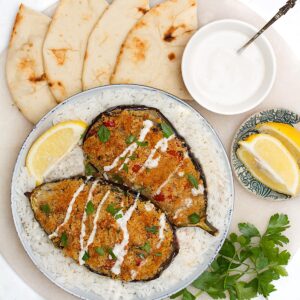 Keri Bevan
Imam bayildi is a much loved Ottoman dish that can be found in varying forms across Asia Minor. Eggplant is roasted and scooped out to form boats that hold a warmly spiced filling. Top it all off with a garlicky breadcrumb topping for a dish that will please vegans, vegetarians and omnivores!
5 from 1 vote
Print Recipe Pin Recipe
Prep Time 10 mins
Cook Time 40 mins
Total Time 50 mins
Course dinner, Main Course
Cuisine Arabic
Servings 4 servings
Calories 289 kcal